A Cocktail and Conversation

Lori says:  So...I saw earlier this week that there is a new animated version of The Boxcar Children that just came out.  That was the first series I remember starting to read.  I loved how simply the children lived and how they were happy with so little, living in a boxcar.  Though I am an only child, I remember being surprised that the siblings mostly got along.  They were super resourceful--keeping drinks in the stream so they'd stay cool, stuff like that.  I was totally impressed.  I am not sure whether I ever actually finished reading that series--I think there are several books to it--but I own most of them and plan on passing them along if I ever have any children.  I still love reading about people having to be resourceful and making it outside of "normal" circumstances.

Anyway, that got me wondering what was the first series you remember reading?  Did you like it?  Why?

Tahleen says:  Boxcar Children was my first series too! I remember buying the first book for a friend's birthday party, and it sounded good so we got one for me too. I wasn't a huge reader up to that point, but I kept finding myself reading well past bedtime by the light in the hall, and it was usually one of these books. My dad said I shouldn't do that, and I would reply with pointing out how he always would say how he wished I would read more. I was just doing what he told me to, ha. I think I liked that they were mysteries, and I liked following the same characters. (Mysteries are still my favorites!)  I'm not surprised you didn't finish the series, Lori--there are over 100 I think! I'm not sure where Gertrude Chandler Warner stopped writing, as I think it was taken over by ghost writers like the Babysitters' Club books (another good one), but there are a ton of them. 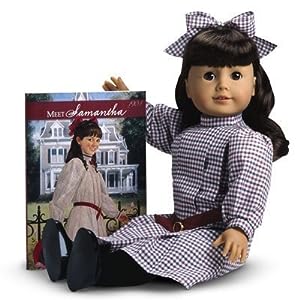 Bridget says:  The first series I remember reading is Samantha's American Girl series. I remember liking it partially because there was a seven-year-old girl named Bridget in one of them, and at the time I was seven. I eventually moved onto Molly and Kirsten, and my sister had Josephina. When I was younger I had a much bigger interest in historical fiction, especially since the eras vaguely matched up with what I was learning in school, so I really enjoyed them. I wish I still had the books so I could pass them onto my little sister (she's six) and eventually to my own children, but I think we gave them away. I still have my Molly and Samantha dolls, though :D

Jana says:  My first series was called Full House Michelle. I loved the TV show so much, and when they came out with a series of books about the youngest girl, Michelle, I was all over them. I'm pretty sure I owned all of them, actually. They read like an episode of Full House. They came out with a Stephanie series too, which I liked even better. Stephanie was my favorite Full House character. And her books had a little romance in them. Hehe.

Julia says:  The first series I remember reading and loving is The Chronicles of Narnia by CS Lewis. I had always been a reader but at some point in my early grade school years, I fell off the reading bandwagon. I remember just guessing on books I had never read to pass my accelerated reading tests. Then I found The Lion, the Witch, and the Wardrobe and I fell in love with the Pevensie children. I devoured The Magician's Nephew and then didn't really enjoy The Horse and His Boy because the kids were gone. I stopped there, not knowing that the others in the series had Edmund and Lucy come back. But reading this series broke me into other books and I loved reading again. I think the next thing I moved to was the Choose Your Own Adventure novels. Those are amazing and would love to read an adult version sometime! I think they exist...

What about you?  What is the first series that you remember reading?  Did you like it?  Did you finish?  Why?
Posted by Lori at 8:00:00 AM