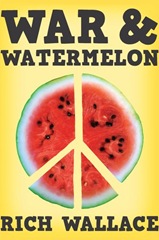 Author: Rich Wallace
Publisher: Viking Juvenile, 2011
Where I got it: I received this book from the publisher via TLC Book Tours. (Thank you!)
Rating: ★★★½
It's the tail end of the summer of 1969, right after the moon landing and before Woodstock, during the Vietnam War and while the Mets started getting hot on their way to the World Series. Twelve-year-old Brody is growing up in New Jersey at this time, anticipating the jump from elementary school to junior high, playing on the football team, and trying to figure out girls—while also trying to come to terms with the bigger issues of the time. Joining his older brother Ryan at Woodstock starts him thinking about peace, love and rock and roll, and how his brother might not always be there—especially once he turns 18.
I enjoyed this story. I mean, once Woodstock was mentioned, I was all over it—I have this great fascination with that insane and incredible concert (I own one of the two CD sets of the concert's recording). There were a lot of music references, including periodic top tens listed by Brody, and very brief descriptions of Joan Baez during Brody's experience at Woodstock.
The setting is so important in this book. We see not only New Jersey during 1969, but also the attitudes of the time—racism is slipped into the dialogue like a whisper, and opinions about the Vietnam War are often vocalized by Brody's father in response to Ryan.
I did have a few minor quibbles with this book. I loved all the music references because of my love for the music of the time, but I wish there was some sort of appendix or something in the back with a little bit of info on all the musicians mentioned. A lot of kids probably won't know who Joan Baez is, or what the songs mentioned sound like (I know I didn't recognize all of them and was too lazy to look them up at the time). I also got pretty bored with the long descriptions of Brody's football games; they seemed unnecessary. I did, however, like the football game in which Brody's female classmate played touch football and did a nice job at beating the other team.
This book would make a really nice companion to a school unit about America in the late '60s. There are themes that are for more mature audiences (there are a lot of references to marijuana and partial nudity), but the language is simple and easy to understand. It's a great way to give younger teens a look at what life was probably like for their parents. I'd recommend it to lovers of the '60s, music lovers, or sports fans looking for a good read.
Tahleen at 8:00:00 AM
Share