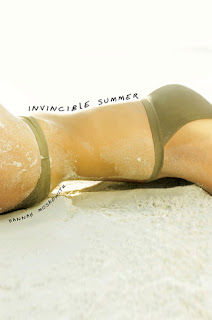 Author: Hannah Moskowitz
Published: Simon & Schuster, April 2011
How I Got It: Galley Grab

Noah’s happier than I’ve seen him in months. So I’d be an awful brother to get in the way of that. It’s not like I have some relationship with Melinda. It was just a kiss. Am I going to ruin Noah’s happiness because of a kiss? Across four sun-kissed, drama-drenched summers at his family’s beach house, Chase is falling in love, falling in lust, and trying to keep his life from falling apart. But some girls are addictive....

So.  I feel kind of bad about not liking this book.  It just wasn't my cup of tea.  I know everyone has different likes and dislikes but I truly thought I would enjoy reading Invincible Summer.  Unfortunately, that was not the case.

The entire story is told from a male's perspective.  Our narrator, Chase, is a teenage boy who we meet the summer he turns sixteen and the reader gets to know him for the next four summers.  So often in young-adult books we're in the head of a teenage girl.  Being inside the male brain for an entire book was refreshing.

The cover.  Yes, it's provocative and I love that it has shock value.  I think the cover will definitely make some people pick the book up (people who might not have picked it up before).  Does it have anything to do with the story?  Well...not really.  Yes, the entire book takes place on the beach.  Other than that it doesn't connect well with the story.

Chase's little brother, Gideon.  I hated how his family treated him though.  He was born deaf but no one in his family ever took the time to learn sign language. If someone in your family was deaf (especially a younger family member) wouldn't you at least attempt to learn how to sign?  But his family members didn't, they made up a few of their own signs which didn't really help.

There are a couple of scenes when Chase is thinking of past summers and how everything is different in the summer.  Magical almost.  I long for the summers of my middle-school and high-school days.  Summertime was special.  Don't get me wrong, I still love the summer but those summers hold some of my best memories.

Camus.  It may be ignorance on my part but I did not know who Camus was until I read this book.  After reading this book I think I've had enough of him.

Pretty much all of the teenage characters quote Camus.  At the most random times to.  They'll be talking and all of a sudden - BAM! - a profound Camus quote.  Or Chase and his older brother Noah will have a competition to see who can think of the deepest quote (by Camus of course).  Or they're reading a book by Camus.  Really.  Camus overload.  It was a bit much and felt a little pretentious.

The characters.  Other than connecting with Chase about feeling the same way about past summers...I just didn't care about the characters.  There is a tragic event that seemed a little much.  The girl (I think her name was Melinda?) got on my nerves so bad.

This book was just not meant for me.  If you've read Invincible Summer

what did you think of it?

If you haven't read it (or even if you have) what is one of your favorite summer memories?

Another Perspective (people who enjoyed the book):