Kelly's Review of "The Trophy Bride's Tale" by Cyrilla Barr

Author: Cyrilla Barr
Published: Bascom Hill Publishing Group, August 2010
Where I Got It: The publishers sent me an ARC!
Why I Read It: Well...I had requested it, it'd be rude not to read it! 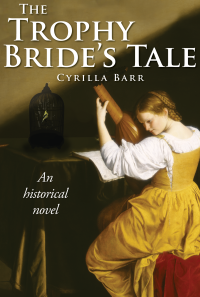 I seriously feel as if this book is a boyfriend of mine. The ups and downs I associate with The Trophy Bride's Tale went to a personal level. I attempted it at least seven different times, only reading 10 or so pages each time, before completely ignoring it for about a month. I finally decided to grow a pair and try to slog my way through it and ended up reading the remaining 300 pages in a few hours and LOVING it! I might need relationship counseling after this one.
Prudenza is a teenager in sixteenth-century Italy when she is betrothed and married off to a wealthy Florentine silk merchant. Their union is initially a tender, yet awkward, relationship. Over time, things slowly unravel. Shortly after the birth of their first child, Prudenza's husband, Matteo, evolves into a psycho, wife-beating prick. His only use for Prudenza is to show her off as his trophy bride. She finds solace in those around her, yet realizes that all her troubles would vanish if only her husband vanished too. She almost unwillingly 'disposes' of him, only to almost immediately be arrested and then later beheaded. Whew.
I usually would have considered the murder of her husband and subsequent arrest and execution as a spoiler, but the forward, or the first five pages, actually takes place at her execution. What are your guys' thoughts on forewords that ultimately give up the end of the story? I thought this one could slide a little bit, as this is based on a true story, but usually these foreshadows are unwelcome in my opinion.
This is a book that I'm truly glad I persevered through. The first 100 pages or so are extremely slow; it isn't until Prudenza and Matteo are actually married that the plot picks up and becomes exciting. I'm just going to add that the cover totally wigs me out. Prudenza is described as being extremely beautiful, nothing like the devil possessed woman in the painting.
It's a good story, but not perfect; 3.5 stars for being so difficult in the beginning.
Kelly A. at 11:26:00 AM
Share