Jana Reviews "Someday My Prince Will Come: True Stories of a Wannabe Princess" by Jerramy Fine 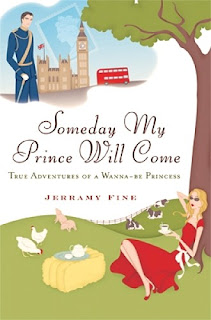 Title and Author: Someday My Prince Will Come: True Adventures of a Wannabe Princess

How I Got this Book: I got it as a birthday present from my mom.

Why I Read this Book: I loved the idea of a memoir written by a woman who made it her life’s goal and desire to become a true princess. It’s unique, and sounded very interesting!

As soon as I found this book while browsing on Goodreads, I was extremely excited to read it! The cover is darling, and I was coming off Anna and the French Kiss withdrawals, so I really needed a good, funny book that was romantic and light. This book is not exactly what I thought it would be, but I still enjoyed it. Here’s the gist of the story:

“Most young girls dream of becoming a princess. But unlike most girls, Jerramy Fine never grew out of it. Strangely drawn to the English royal family since she was a toddler, Jerramy finds Peter Phillips (the Queen’s oldest grandson) in a royal family tree when she is only six years old, and decides immediately that he will be her future husband.

But growing up with hippie parents (who gave her a boy’s name!) in the middle of a rodeo-loving farm town makes finding her prince a much bigger challenge than Jerramy ever bargained for. She spends her childhood writing love-letters to Peter c/o Buckingham Palace, and years later, when her sense of destiny finally brings her to London, she must navigate the murky waters of English social circles, English etiquette and English dating. Along the way, she meets Princess Anne (Peter’s mother), befriends Earl Spencer, and parties with the Duchess of York. Yet life is not the Hugh Grant movie she hoped it would be. Her flatmates are lunatics, London is expensive, and English boys can be infuriating. But just when she thinks it might be time to give up and return to America, Peter magically appears in her life.   Someday My Prince Will Come is a hilarious and heartwarming true story about following your heart and having the courage to pursue your childhood dream no matter how impossible it seems.”

I’m sure you can understand why I wanted to read this! It sounds like so much fun. Jerramy is a funny writer, and some of her stories are pretty entertaining to read. I’m going to get a little critical for a minute, though. There are just a few things I had a hard time wrapping my head around.

Jerramy acts like she absolutely hates her family, specifically her parents. She complains about them, makes fun of them, talks about how they embarrass her to no end, and how she is convinced she was switched at birth. When she finally moved away to college, she could not wait to leave them behind in the dust. They were so low-class, compared to her. That made me sad. Yes, they were crazy hippies with skewed views and weird ways… but they were her parents, and whether or not they sent her a monogrammed tray for rolling joints, and told her to try opium in her home before she went to college so she’d know how she reacted… they were still her parents, and you could tell they loved her. I wish she had been a little more respectful in her writing about them. In turn, I would have respected her more.

What child at the age of 6 sits on their bedroom floor, reading the royal family tree, and figures out whom they want to marry based on their age difference and level of royalty? I teach 6-year-olds who can’t even read their own names yet. I’m not buying that this really happened. Haha. There were a few other instances like this one where I couldn’t help but say, “Yeah, right.” Jerramy  said this is all true, though, so I guess she was just very, very determined from the get go.

When Jerramy finally got to London, she acted like a slut. She slept and drank her way into the most prestigious social circles, one hangover at a time. She couldn’t ever remember the names of some of the guys she hooked up with! At one point the guy she was on a date with knocked on the bathroom door to check and see if she was ok. Before she could open the door, she had to shove another guy out the window. I wasn’t impressed, but then again… people can make their own choices. Lol. I just got a bit tired of reading about these encounters.

Now don’t get me wrong, there were parts I liked. Those three instances just kept creeping back into my mind as I read. While some aspects of Jerramy bothered me, she never, ever gave up on going for her dream. No matter how far-fetched it seemed, no matter how insane her friends thought she was for hanging posters of the royal family in her teenage room, and no matter how many people tried to stand in her way, she never gave up. I liked that about her. She was one determined spitfire. She lost friends along the way, her grades in school suffered, she went into major debt, she had her heart broken by a lot of the guys she met along the way, and she cried a lot. But she never gave up! Haha. I don’t know if many people would have been that persistent.

I learned a ton about English culture and the royal family. A TON. It was very interesting!

I totally envy some of the things Jerramy got to do along the way. I mean, who else got to spend New Year’s Eve 1999 in India and ring in the millennium at the royal palace there? If I remember correctly, I had an awful cold and spent the night in bed watching a ballroom competition on TV. Oh yay. She got to live in London! I love all things Europe, so I was quite envious of that. She went to a lot of parties and events that sounded so glamorous. She did meet members of the royal family, and eventually Peter himself. No, that was not a spoiler. It even says it on the back of the book. So, not only was she stubborn, but she succeeded! Not many people get to live out their dreams. I think that’s pretty lucky.

Overall, if I take away anything from this book, it’s hope. Hope that I can achieve all the things I wish for myself if I work hard and press on, even when obstacles appear. I’ve also learned to respect my family, because no matter what happens, they had a hand in getting me there.